We regret to inform you that… 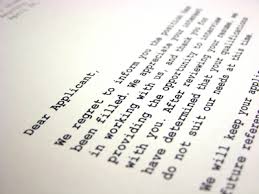 We regret to inform you that you have not been selected to form part of the Tuks FM team during the August 2014 intake. Please feel free to reapply during the February 2015 selections.

We thank you for your application and wish you well in your studies and future endeavours.

Folks, let’s rewrite the goddamn thing again, will we?!

Dear Another brick in the wall

Universal pretence dictates that we fake concern when rejecting a deserving guy’s job application. In that case, we’ll just throw you a big “we regret” phrase, and hope that you are stupid enough to think that we give a hoot. You might want to reapply during the February 2015 selections. It’s your pen you’ll use, so you’re free to yet again drop us another application. But know that the same response will be thrown at you. No one fakes the “we regret” phrase like us.

Why would we thank you for wasting our time? Instead of making copies of this generic letter, and wasting ink, we would have seen at least one worthy applicant. And we don’t really care what happens to you after this. We won’t meddle in your business of future endeavours and stuff. It’s your goddamn life and our wishes won’t change a thing.

PS: It just appeared to us, rejected applicant, that we did not state the reasons for your rejection. We’ll list them in this post script, we have decided:

You happen, unfortunately, to be black. That, in itself, is not a problem. It would be great if you spoke Afrikaans – even a little bit, you know. We have black people here, and they speak a little bit of Afrikaans. Yes, we know that you applied to work in the NEWS department, where English is the principal subject – but Afrikaans would still help in your daily interactions, you know, with the staff, sort of, which is predominantly white.

The reason we called you to an interview was so we could review your English speaking. Never mind the Afrikaans. We wanted to detect that “Private School Twang” that cultured and cool blacks exhibit, you know. Those are the sort of blacks that understand us, man. We went to the same privileged high schools, you know.

In Corridor A1 some lad has decided to paste pictures of naked women on the bathroom walls.
An Afrikaner did it; I mean, everyone knows that all the white boys in that corridor are descendants of the great trekkers. And by wearing those Boer shirts they remove all doubt. And each and everyone of them decorates his room with pictures of naked women.

Now, the pictures are rather obscene. What with women – boy, are they beautiful – flaunting their nicely tanned petite bodies in front of a camera-man, taking image after image for young lads’ consumption in the east of Pretoria.

But one ZCC guy is enraged. He is aghast. He just can’t “comprehend” why they pasted pictures of white women only. Surely, there are black women who can rival any of those whites in beauty, he said.
The guy, having just joined the EFF, made sure that he educates us about the nature of transformation, and just how those pictures’ failure to represent this place’s demographics is proof that this institution does not take black people seriously. But the comrades said he shouldn’t blame the whole institution on this. It’s too petty an issue. The blame should be shouldered by Piet.

We had this talk a few minutes ago in Nazo’s room. I have since left. But the general sentiment was that those pictures should be removed. If they’re unwilling to do that – the white people, that is – they must at least put up some black girls’ pictures. Haven’t those people heard of diversity, the comrades wonder. The ZCC guy doesn’t think much of Afrikaners though. I know because he retorted, “What do you expect from Boer boys anyway?”.

I’ll go and check out the toilet walls in Corridor A1 tomorrow evening.

Because I’m a good guy, I’ll give you notes:

Stop luring me into your Oscar Pistorius Arguments, you Engineering Students!

Okay, engineering student, listen here: yes, I am a law student, and yes I know who Oscar Pistorius is. Hell, I know about the murder, too, just like everyone else. I heard about it in the radio last year, and later read about it in newspapers.

I followed the case for a while – perhaps for three days – then I stopped. See, everyone was following the damn thing, and in no time everyone became some sort of expert.

So, I cannot possibly analyse the case for you, pal. It never interested me, and it never will. It was a murder case for the rich and powerful. And I could not possibly have a stake in it all. That’s about the only opinion I ever formed about the whole freak show.

Now, stop asking for my opinion about the damn thing. But if your curiosity can rival that of the cat, and you find that there are certain intricacies about the law that you very much would love to understand (like, what dolus eventualis is, and just what elements prove culpable homicide), don’t hesitate to visit me. I’ll be in Room C4-286 reading Herman Charles Bosman‘s Voorkamer Stories.

The politics of Swazis and their kings, and of great and benevolent gods.

And, on the 8th day, the gods said, “Let there be Swazis”, and it was so. From beyond the skies, the gods’ orotund voices were heard giving further directives, “Let them be the most submissive of all nations. And- make no mistake in this one- let “respect” be the one trait that defines them; other attributes may follow. Let them be wise in a peculiar kind of way: for them to avoid conflicts, let them desist from questioning how they are governed; let them believe all that they are told and let them bow down to authority of whatever form”.

Then, in the evening of the same day, just before roosters and hens jumped up to nest, the gods’ voices were heard bellowing, as if in haste to finish the day’s business: “And let there be a king to rule over them- Swazis that is”. And it was so. “From his offspring one male will be chosen after his death. Every king shall be blessed with godly intelligence, and will never, ever, be at fault”. The gods continued to say, “It shall be the king’s duty to take care of his subjects; and, since the subjects are peculiarly intelligent, it will not be a difficult thing for the king to execute his duties”.

And the gods saw that it was good, but not good enough. To perfect their 8th day creation, the gods saw it fit to create aides to the king. And they will be known as “Liqoqo”, came the instruction.

The gods, still not convinced that everything had come to perfection, looked at the vast expanse of land just occupied by the newly created Swazis, thought to themselves, “surely the king and liqoqo will need even more help to take care of this great nation”, and they proceeded to say, “Let there be chiefs to rule every community of Swazis in the land, on behalf of the king”. And it was so.

Having convinced themselves that all was perfect, the gods curled up in their couches in the warm corners of the heavens and went into deep slumber, but not before transferring all power to the king. But, from time to time, the gods wake up and whisper words of wisdom to the king. Without this selectively induced wisdom it would be difficult for the king to issue out godly decrees. Hell, he would not be able to take good care of his intelligent and respectful subjects.

Well, I’ve just told a story, the essence of which I have been hearing all my life. Talk to any young fella in Swaziland- a grade 5 kid. In less than ten minutes you will learn that the king is the greatest man that ever lived. His social studies book says so; and there are hints of this sentiment in his English Language text book, too.

Get involved in an everyday political debate with a weed-smoking guy at the local grocery store; say to him: “This country is in shambles because of the king’s absolute power; and we seem to be going backwards, away from first-world status, because of the corrupting nature of his position”. The response you’ll get is this: “How dare you spit such garbage about the king?! He is the one who gives grants to the aged; he recently ordered that school principals desist from demanding top-up fees from needy and orphaned school children. The king cares, and you have to respect him for that! He is not the problem. The people around him are the malevolent lot”. It’s either this argument or something to the same tune.

Try to critic the nature of the three arms of government in the country. Say, for example, that the king’s power to appoint both the prime minister and the chief justice is bad for the separation of powers doctrine. One man, in power till death, appoints all three heads of government’s arms. And, against a certain provision of the constitution he assented to, the king can continue, despite protestations, appointing the same man, term after term, as the chief justice- regardless of the man’s previous record. Say all this and see if your statements will be published in local papers. You cannot just say ungodly things about the king and expect to be published.

Go back in time and remind folks that the king once suggested that to sort out our difference of opinion regarding the nature and form of democracy it would be best if we throttled each other. He said it in a speech in 2008. The king of Swaziland, placed in the royal throne by gods we never saw, was ever ready to throttle dissenters in 2008.